How can we measure sound?

The answer is sobering. For half a century, thousands of researchers and engineers around the world have been trying to metrologically define the secret of good sound. It still has not succeeded. It will probably never succeed. We record music in different ways. This is different in the morning than in the evening. When we are stressed, we hear differently than when we are happy. Emotions play a significant role.

With today's technical possibilities, we can neither record nor reproduce sound, ie music, with 100% accuracy. There are no perfect microphones on the input side, nor are there perfect speakers on the output side.

This is the basis on which the developments of the past decades are based. But the pursuit of high fidelity, that is, the reproduction of the original with the highest possible fidelity to nature, has strangely taken a different path. Instead of continuing to struggle for every ounce of quality improvement, the original goals have strictly turned into the opposite. This shows the success of "Hi-Res" data formats. It is based on the dictate to be able to drastically reduce costs and distribute cheap copies, which should also offer a good reproduction quality on simple devices, whether mobile or at home. This "dithered" musical quality contradicts all hi-fi principles. At the same time, the demand on the players dropped. The lowest end is marked by USB-DACs, the doodle sound from the mobile phone or the permanent sprinkling in the supermarket with squeaky loudspeakers that spoil the mood.

1. Measurements are essential in the development, repair or modification of hi-fi components. However, they say very little about the quality of reproduction. By the way, just as little as specifying the watt-load capacity of speakers.

2. The pursuit of progress and improvement is an elementary virtue of man. Without this feature, there would have been no car, no steamboat and no moon landing, no matter how you rate them. It is therefore necessary to search for new ways to improve the playback of a hi-fi device, and refuse lower quality.

3. The idea of ??sustainability implies that we discover and rank the value of old equipment. The "high-end player" with DVD drive, as he now tinkers in every PC, is in a defect in just a few years to obtain. The series can be continued arbitrarily.

4. We spend a lot of money on something unnecessary and of little value. The "disposable camera" stands as a symbol for expensive management of raw materials and resources. However, the change of heart has already overtaken many people. More and more people are spending their money consciously on products that combine a high level of quality with a long service life.

5. Music is an incredibly fascinating medium. She deserves to be given an appropriate technical base to enjoy her full beauty and diversity at home.

If one looks at the types of audio electronics of all previous stages of development, one finds a narrow-band epoch, with which the desired faithful reproduction of music is currently still best to achieve. After replacement of the vacuum tubes by germanium transistors and their replacement by silicon transistors, hi-fi electronics were manufactured from many individual transistors in so-called discrete construction. 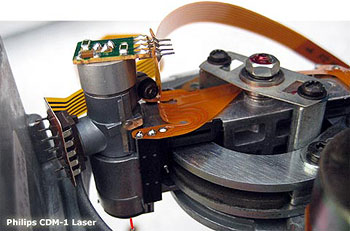 All of the following developments, due to the ever-increasing integration of circuits in silicon, provide advantages in size and cost in hi-fi electronics, but disadvantages in e.g. Pulse or crosstalk behavior. Without the growing integration, a CD player, or a computer, would hardly be conceivable in living room-suitable dimensions. But what applies to a hi-fi amplifier of the highest quality is also true for a CD player. Discretely constructed devices are more expensive in production, but offer a higher sound quality.
The stage at which we can expect no real improvements to audio devices (except loudspeakers only) has long since begun. Manufacturers focus on the largest consumer market with "multimedia refrigerators". So-called discrete components are hardly ever produced and are already extinct to a large extent. Absolute priority is given to highly integrated chips that can be used universally in PCs and AVR receivers, microwaves and cars. The development work in the large corporations consists predominantly in programming these universal chips for the respective application. Due to the lack of discrete components, no one will be able to produce an audio device with the highest standards - even if he wanted to.

Will there be only one universal chip for every purpose in the near future? With built-in over- and upsampling? With "sound field generators" that iron away all the weaknesses of the design in an unnatural way, and cheap switching power supplies on SMD boards, which offers conceivable poor conditions for music playback at a high level?
This future will come. Instead of a music system in the living room of the consumer will be a multimedia computer, which manages the refrigerator in addition to the playback of music and videos and automatically deducted fees for downloaded from the network MP3 songs.
So what remains for those who still attaches great importance to the quality of music reproduction? There is only one way: to search for already manufactured devices in a discrete design, to lovingly preserve them and, where necessary, to improve them and to replace defective or aged components.
It's understandable that people with two ears and something in between have been holding onto the vinyl record for many years. Among these connoisseurs, the vinyl sound quality is unsurpassed natural and balanced. But what about getting a CD player that overcomes the physical limitations of the best vinyl recordings?
Of course, the existing CD device base must be carefully restored. Tackling the weaknesses found in more than 20 years of testing requires a lot of time and experience. But the equivalent you get is high: you get a device with very natural, spatially precise and direct sound that allows music playback from a CD in a previously unknown dimension. This value is not high enough for lack of competition.