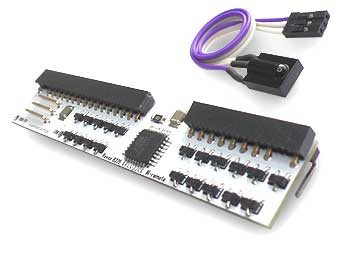 Existing handsets for remote can usually control the module, it uses the widely used RC5 code. For example, almost all handset for CD from Philips, Grundig, Marantz ... or even a universal remote control.

All modules intervene in the analog way in the function, it is simulated the operation of the associated button on the front panel. A sonic impairment due to susceptibility as in some digital remote controls is thus excluded.

The plug-in module allows the use of more common CD remote controls and offers an additional functionality by the direct selection of the track numbers via the number buttons, the volume setting of the variable output jacks and the headphone output, or the source selection between CD or digital USB input (only with USB-in module). All special functions can also be controlled with number combinations, as some manual switches have no corresponding keys:
0,1=StdBy, 0,2=USB-in/CD, 0,3=Loop, 0,7=Volume-, 0,9=Volume+

All functions of the CD 104 - CD 204 can be remotely controlled. The special functions can also be controlled with numerical keys, as some manual switches have no corresponding keys: 1=Open/Close, 2=Programm, 3=USB-in/CD, 4=Repeat
Installation example: CD 104 - CD 204

The RH8808 handset was chosen because it is superior in function and value to other models. It is intuitive to use well in the dark and does not provide countless keys that are superfluous in the mentioned CD players.

The original handset of the Philips CD304 in an aluminum housing - used and functional. Since it has no number buttons or volume, it is not the first choice for the B225 module or nanocamp pre-amplifier modules. A good and timely authentic choice for one of the modules like CD100.

A functional replica of a well-known handset from the 90s. Many functions and rubberized buttons, but the quality of the plastic case is rather easy to describe.

This handset ensures order on the living room table. He steers beside the CD player still further 3 devices. All you have to do is enter a device code from the enclosed list.

In addition, the handset has a learning function to copy functions of an existing remote control. Macros can also be programmed to perform multiple functions at the touch of a button.

In the first attempts to make a Philips CD 204 remotely controllable it quickly became apparent that conventional finished solutions were not suitable. On the one hand, there were no suitable manual switches available for these all-round remote control modules and no changes could be made in the software of the chips used for more suitable manual switches. This lack of flexibility led to quite different problems. Since the CD 204/104 can be used for a number of functions in electrical terms, two switches are actuated, one of which also serves for a different function, these modules could not be used. 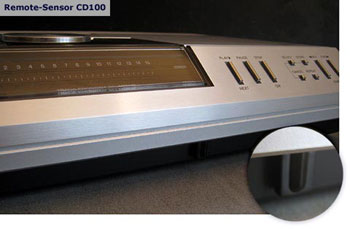 Even more important, however, was that a remote control board for these CD player models is made with authentic components from the time epoch and may have no sonic effects. First, it was important to find out why some CD players with original remote control sound worse. Theoretically, two causes came into question for me. The suggestive perception, or the clock frequencies with which such a system works.

As a test object served two CD 304, in one of the original remote control was removed. And indeed, the CD 304 without a remote control sounded a bit more relaxed. In the cause research then Commissioner Zufall was helpful. The door to the factory seat opened a crack, someone put his arm in and pressed the light switch, it was already dawning. There was light and I noticed a slight flicker in the tube display. A defect? Fluctuations in the mains voltage? I put my hand in front of the 304 infrared sensor, the flicker gone. The light of the energy-saving bulbs apparently radiated a wave range, to which the infrared sensor at the 304 reacted. That had to be checked.

The 304 so responsive explained its wiring diagram. The -18 volts for the converter chip, from which directly the analogue signal is obtained, are connected in an original CD 304 with the -36 volt for the control front without special buffering. A flicker in the display, caused by oscillation of the original remote control with a receiver that was still too broadband at the time, directly leads to an influence on a tonally relevant voltage. With an original CD 304, it is advisable to keep the listening area free of disturbing light or simply cover the infrared sensor with a piece of paper.

The decision was made to construct an analogue remote control board, which is electrically decoupled from the circuits of the CD player. As it were simulated the manual keystroke on the control buttons of the CD player, but is also narrowband in the reception. In addition, the important voltage of -18V is independently regulated and buffered on my CD players. For this remote control module to use time-authentic components in the design "DIL", led to some difficulties. There were no approaches to control software available, nor were ready-made devices to burn the software into these old chips. It had to be started at zero and first of all all necessary devices such as this burner and a device for reading the sent codes of various hand switches are constructed. 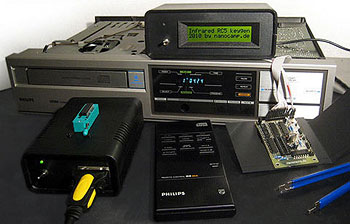 The development of an authentic analogue remote control board with no sonic effects, together with all necessary devices and their own software, took 3 months. In the end, however, it became apparent that the flexibility gained in the software now also made it possible to remotely control other CD players such as the CD 100 with the same remote control module. The fact that almost every handset could be integrated into the software, also allowed a specific adaptation to use only a single remote control for all devices used in the living room.

After 3 years of continuous development, the analogue remote control module was ready for use with all first generation CD player models.