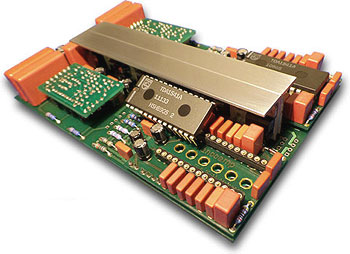 Active correction on the TDA1541A

Two TDA1541A transducers with a total of 4 channels work here, which are integrated in a perfect interaction with the metronom. Resulting errors in the digital conversion are corrected dynamically to the input signal in the shift register of the converter. The internal oscillator of the converter is synchronized in its frequency. Add to that the hybrid output stage, which offers the greatest possible precision and impulsivity without a chip operational amplifier in a discrete design. With breathtaking speed, this output stage releases so far unperceivable details. And this playful and buttery soft without the hint of an analytical sharpness. Even in their natural timbre, this output stage is tirelessly superior. The first CD player to render an absolutely correct, three-dimensional rendering. 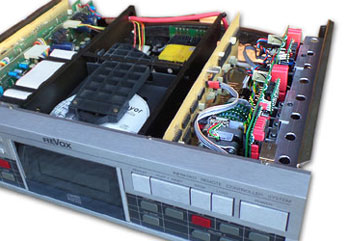 In the Revox B225, the metronom board with the two TDA1541A converters has been extended by a second board with additional discrete operational amplifiers. Through an interposed electrically controlled step switch to adjust the volume, the second output stage provides the variable output at the rear and the headphone output at the front. The volume is adjusted by the original buttons on the front panel.

After five years of development, all new developments on the 16-bit TDA 1541A converter chip were implemented for the first time with the metronom. It turned out that the current 32 bit architectures can only approximately simulate the performance of a metronom using DSP (digital signal processing). The term pretend is apt, because in a DSP the original signal is manipulated by a digital processor, so no neutral reproduction takes place. The renunciation of a metronom on psychoacoustic manipulation, which in the first listening impression operates a showmanship, shows a pleasant, yet high-resolution listening experience even over long periods.