If you have let the wire rope of the mechanism jump off the drive wheel when changing the belts for the CD drawer on one of these models and you have painstakingly pulled it back on again after some time, then you may have thought how important it is to follow a manual. That happened to me the first time - that's why this manual exists. And the new 4 belt set blue-belt is there because I no longer wanted to have to change these belts every few months.

The geometry and material composition have been optimized, the set consists of 4 belts with each different dimensions. Compared to common butyl belts, blue-belt provide slip-free power transmission, dramatically longer shape stability and durability.
Only a few tools are needed for the installation. 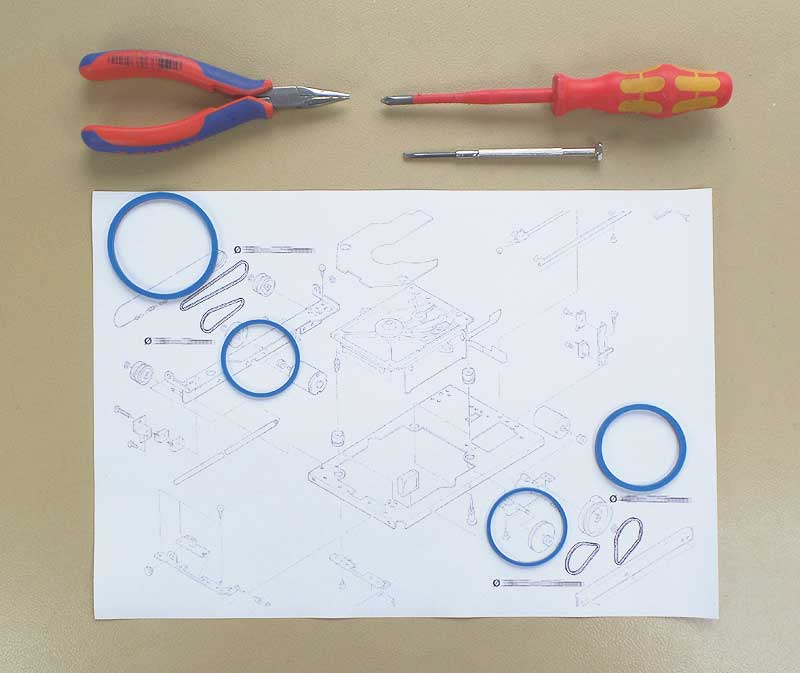 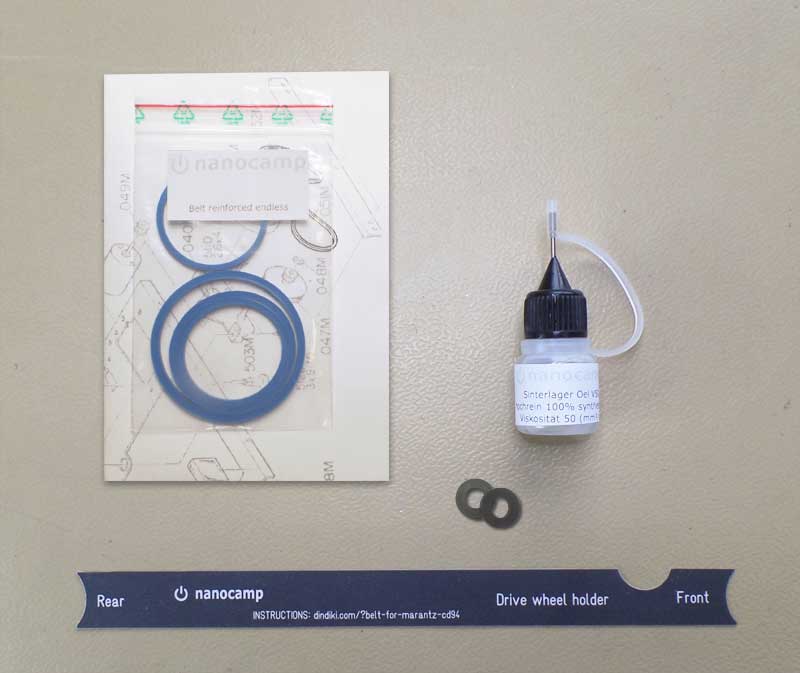 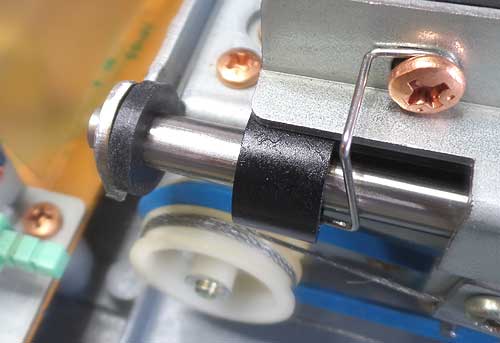 The electronic boards may differ depending on the model, the mechanics are the same.
Pull out the power plug first! Only then remove the upper housing cover with the Phillips screwdriver. Sort the 4 belts according to the intended position.


Click on the respective images for a larger view 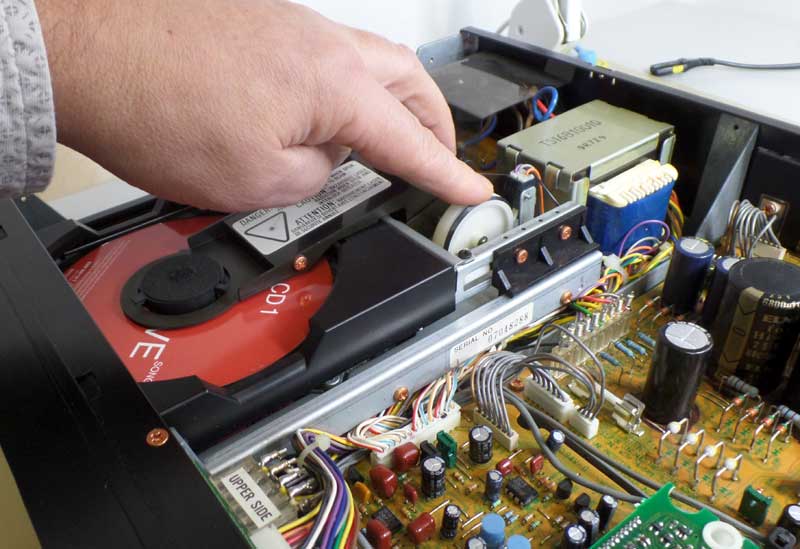 Turn the white drive wheel on the right to the rear to raise the CD tray. 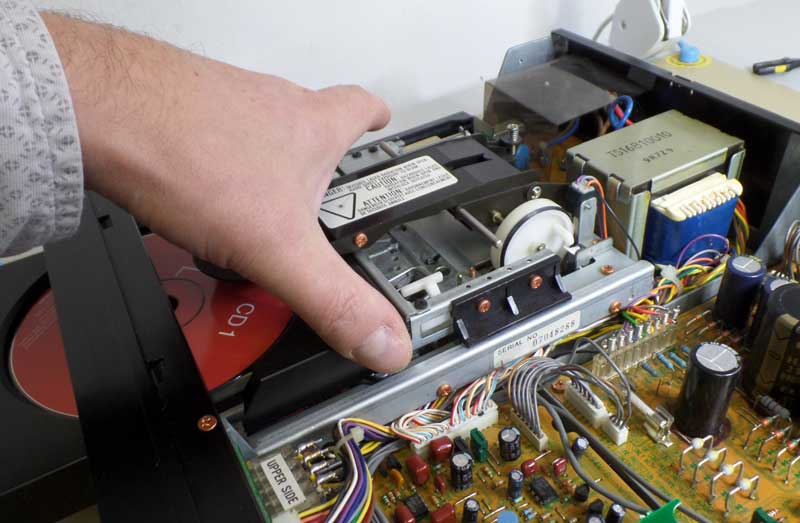 The entire CD tray can now be pushed out to the front by hand. 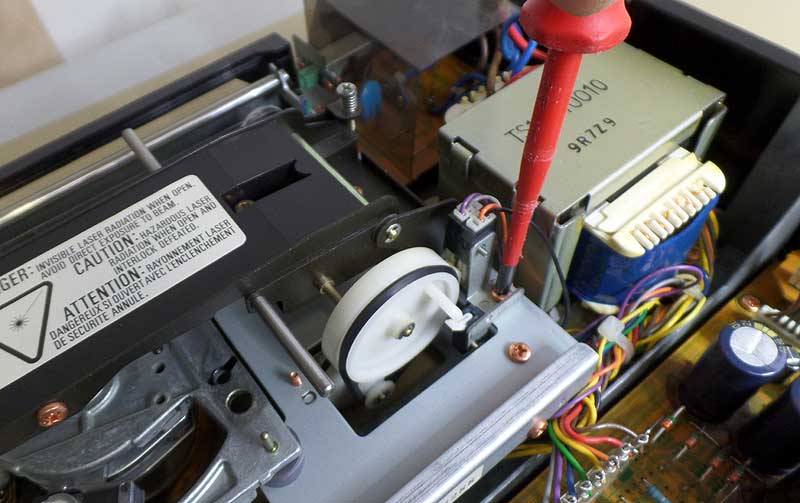 Loosen the holder with the limit switches using the Phillips screwdriver and place it to the rear. 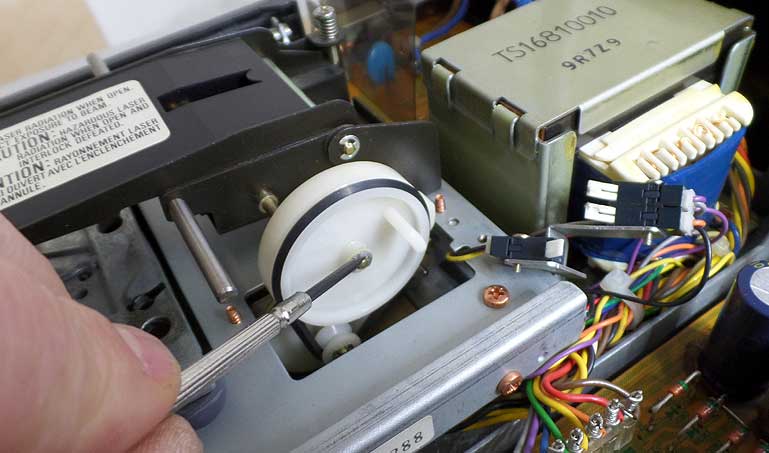 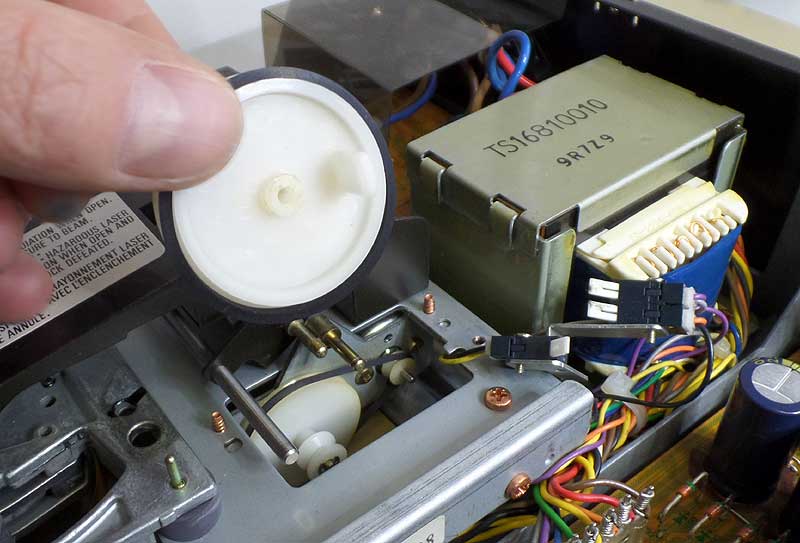 The drive wheel can now be removed together with the first belt on the right side. The second smaller belt is now freely accessible. 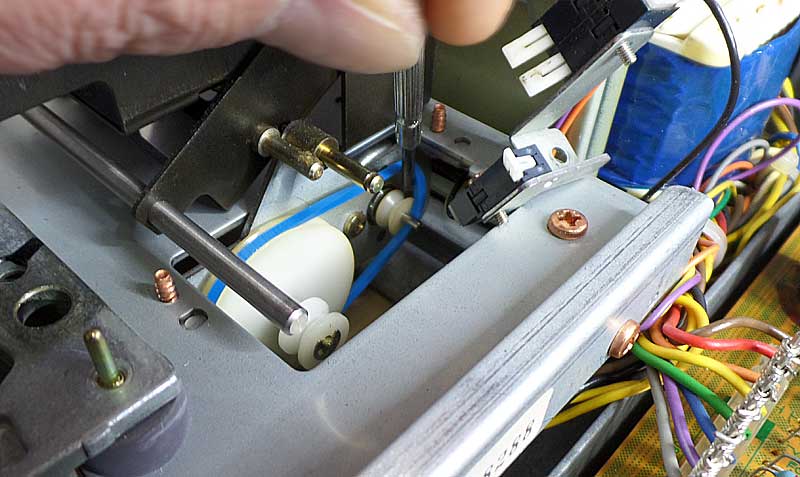 The small new belt can now be inserted. First place the belt on the larger wheel by hand, then use the small slotted screwdriver to pull the belt onto the smaller wheel. 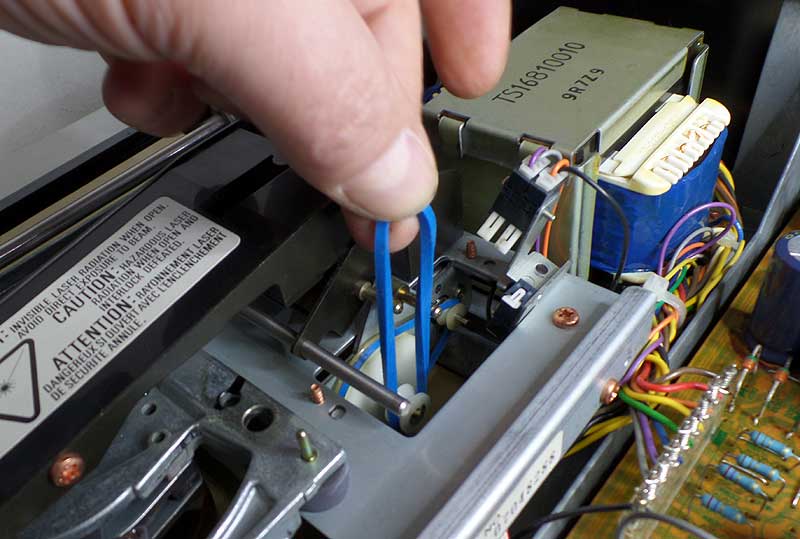 First place the larger belt around the smaller wheel. Then insert the loose drive wheel into the belt and push it onto the shaft only a small distance at first. 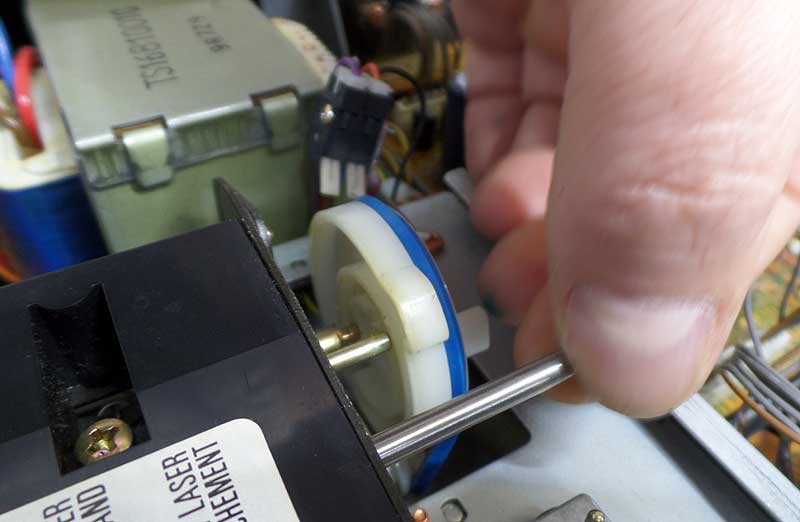 Before the drive wheel is pushed all the way onto the shaft, the front steel axle must be lifted slightly so that the smaller pin on the back of the drive wheel fits in its raceway. 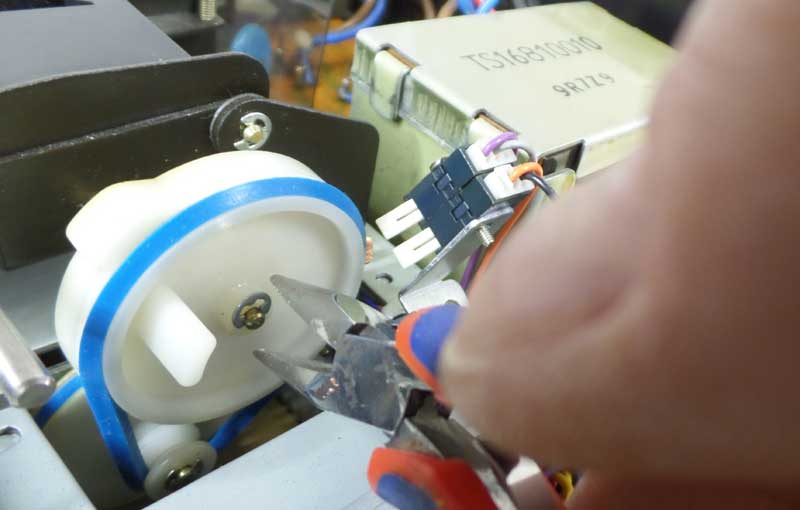 The snap ring for securing the drive wheel can then be inserted with the needle-nose pliers. 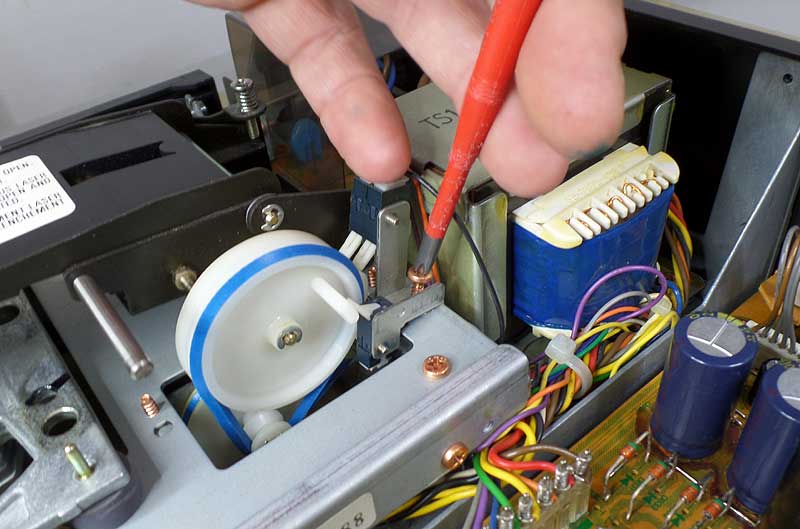 After the holder with the limit switches is reattached, you can now turn to the other side with its two belts. 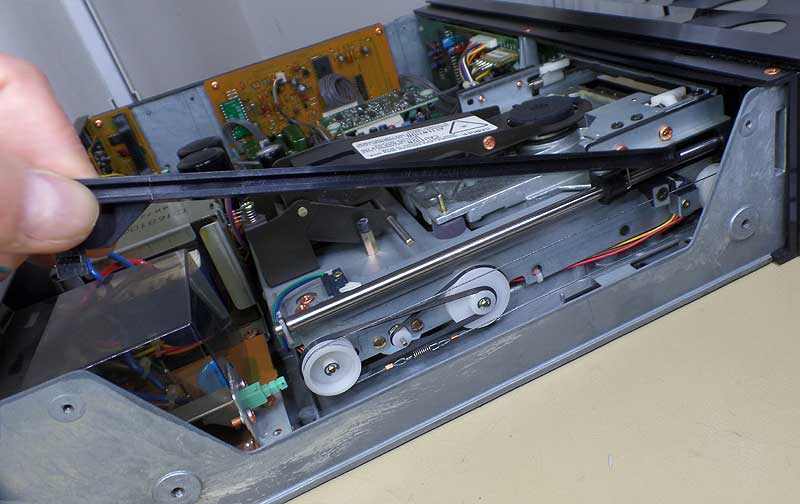 The extension can then be pulled diagonally back out of the operating front, revealing the remaining two belts. 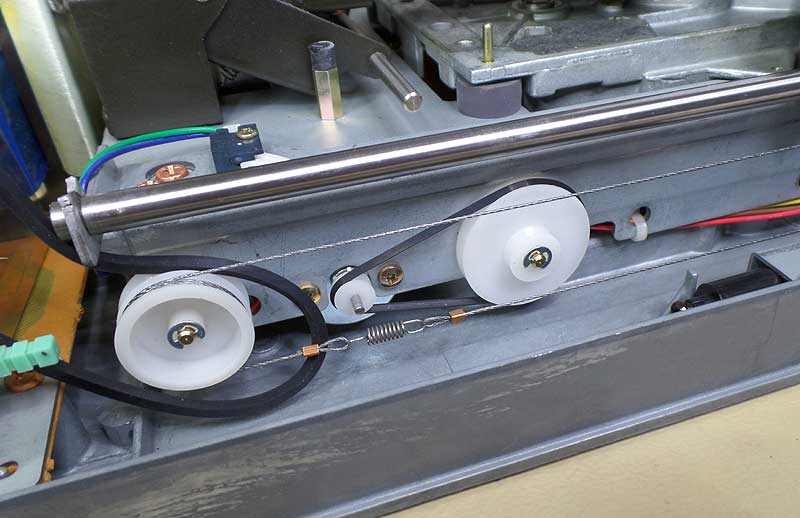 Remove the front larger belt from the smaller wheel and move it to the side to replace the smaller belt first. 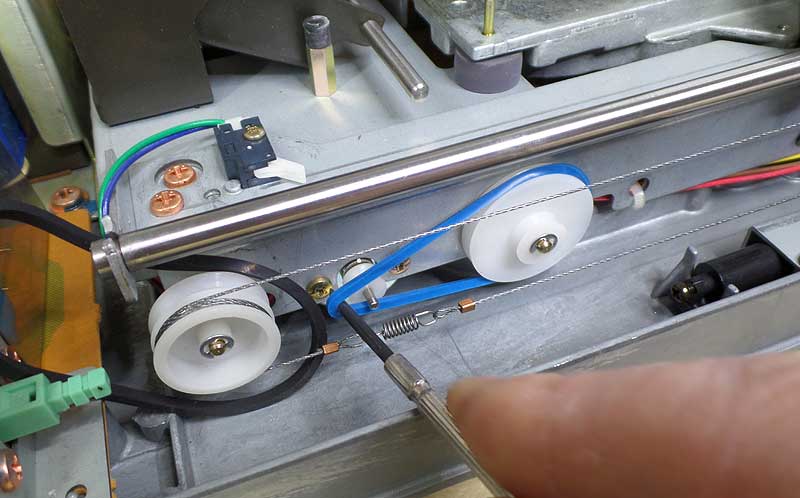 As before on the other side, first place the small belt on the larger wheel by hand, then tension it on the smaller wheel with the slotted screwdriver. 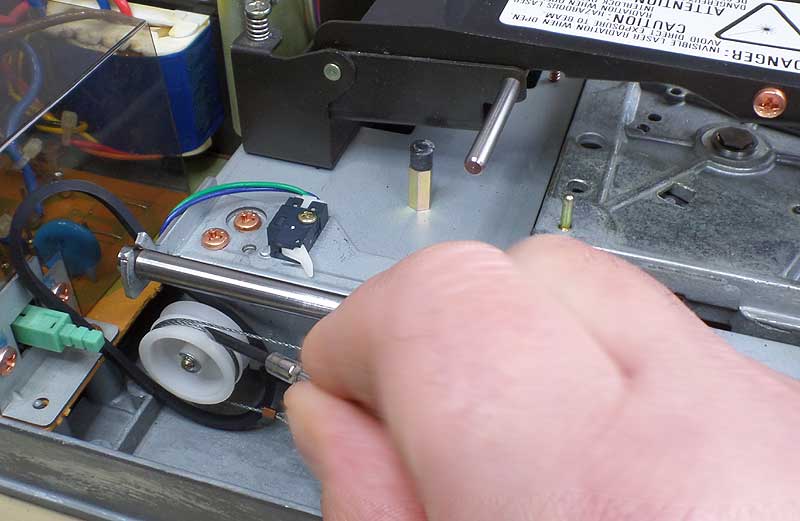 To insert the spacer for the drive wheels, push the wire rope aside with the flat-blade screwdriver to make room. 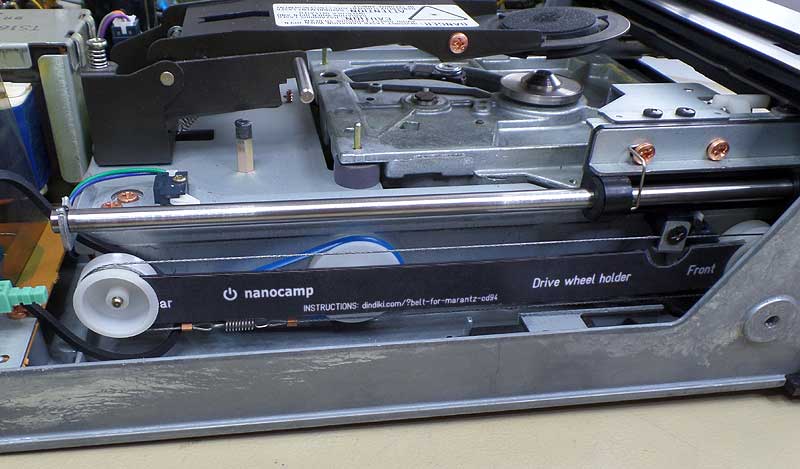 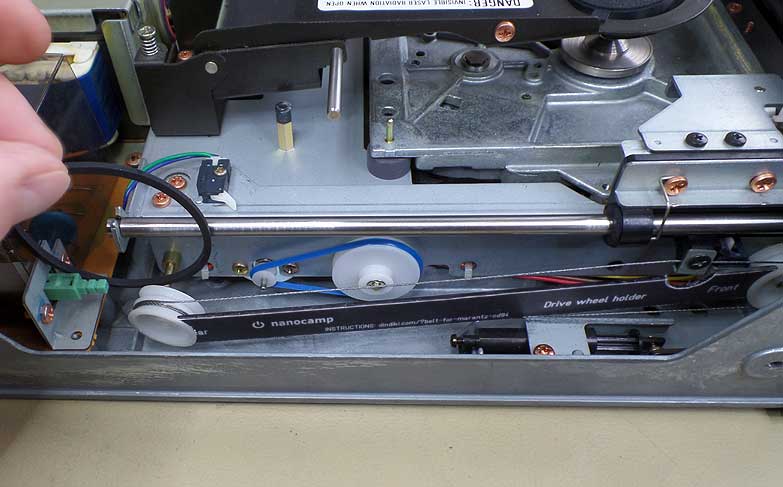 The rear drive wheel can now be pulled off the shaft with the wire rope in order to remove the old belt through the gap between the shaft and the drive wheel and insert the new one. 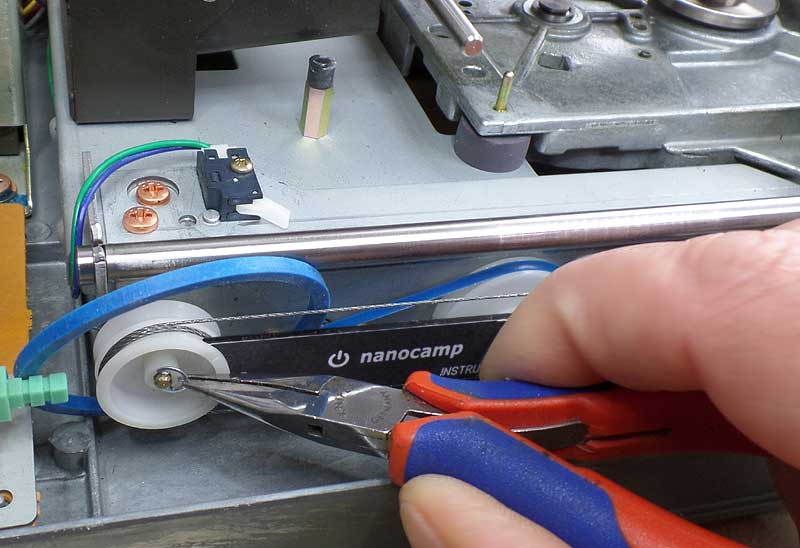 Now secure the drive wheel again with the snap ring. 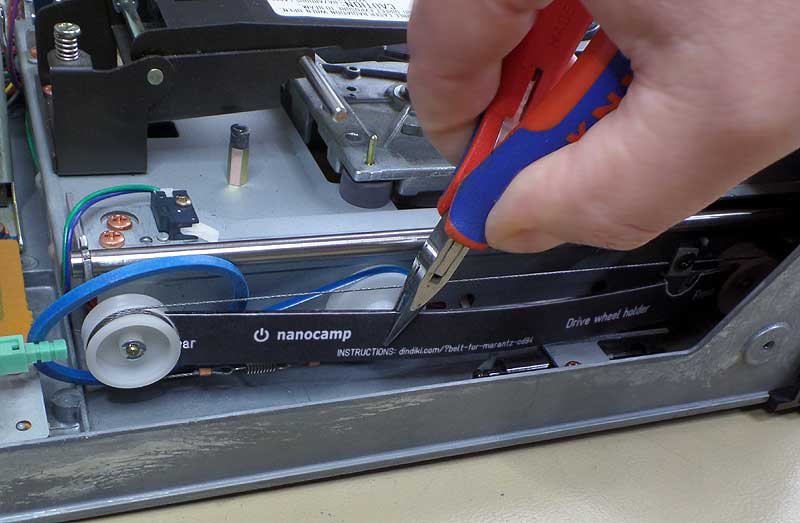 The spacer can now be removed again with the needle-nose pliers. 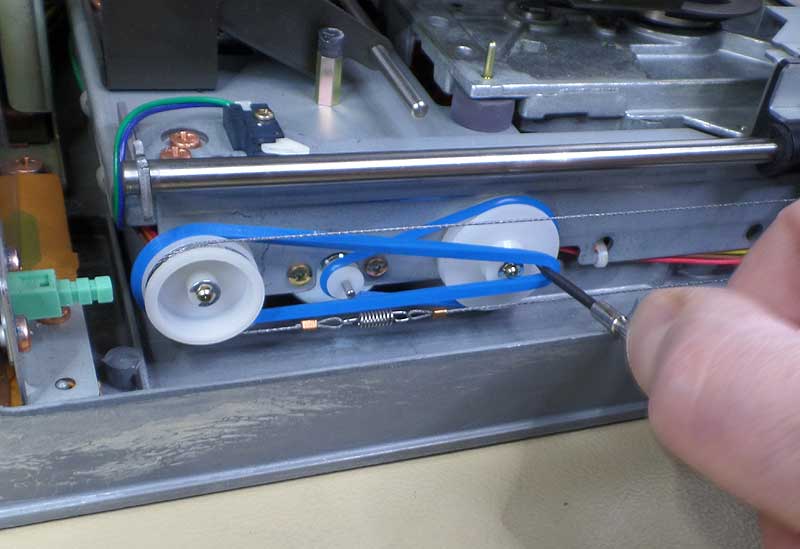 Now the last belt can be put on. Mount the extension for the power switch in reverse order. 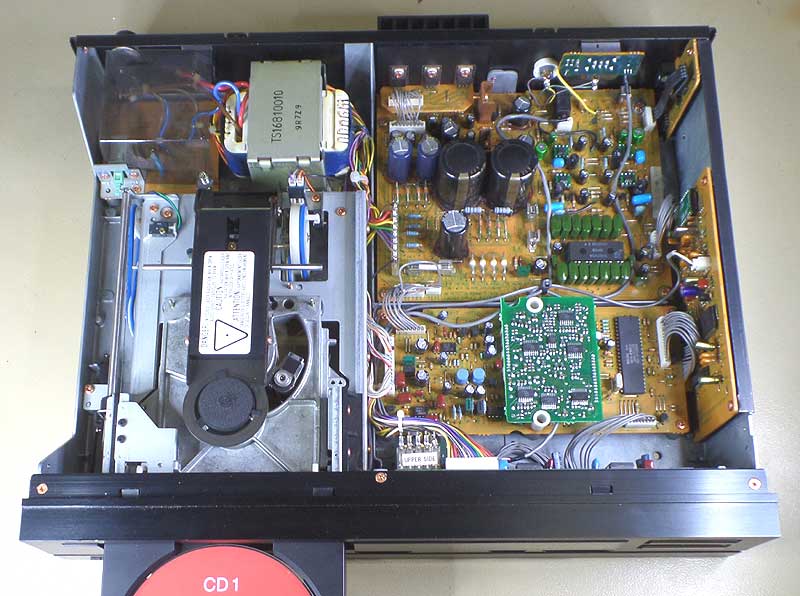 When the right drive wheel is turned all the way back, as it was initially, the CD tray can now be pushed in with gentle pressure.

Position of an end stop bumper from the complete set on the round steel of the linear guide.

Finally, the linear rails on the left and right can be cleaned with alcohol or benzine. Apply a micro-drop of sintered bearing oil from our dosing needle bottle to each rail - since the sintered bearing oil has an enormous creeping capacity, do not apply more than a micro-drop. Do not use mineral oils or adhesive lubricants, they will immediately increase the sliding resistance.

Complete revision sets for Marantz CD94 and others